Can you believe I left for this trip 2 weeks ago? I keep flip flopping between feeling like its been longer or shorter than that. I am slowly settling into the groove of travel and it feels nice not to be the “newbie” everywhere I go… though just twoo weeks is pretty short because it seems like everyone I have met so far us traveling (or has already been travelling) for months. In fact I just met a Californian who is travelling for 20 months in total, with possibilty to extend. Most people seem to hover around the 2-3 month mark, like me.

I decided to slow down a little bit this week, parking myself in Montañita for 6 days. It a renowned party town full of surfers and gringos, but I was mainly there for the beach and so that I could take some spanish classes. It was an atrocious (albeit beautiful) 11 hours journey on winding roads from Baños, the last 6 hours of which I was sure I was going to be sick. I dont know if it was something I ate, car sickness or a result from dropping altitude so quickly, but I felt awful.

When I made it to my $6 dollar a night hostel I only moved between my bed and the washroom. I used this time to watch about 5 episodes of “24” (season 3) and doze off. I woke up feeking a little better and stumbled over to Casa Del Sol to arrange my spanish lessons and then started my first 3 hour class.

Here is a photo of me and Miguel, my awesome spanish teacher. 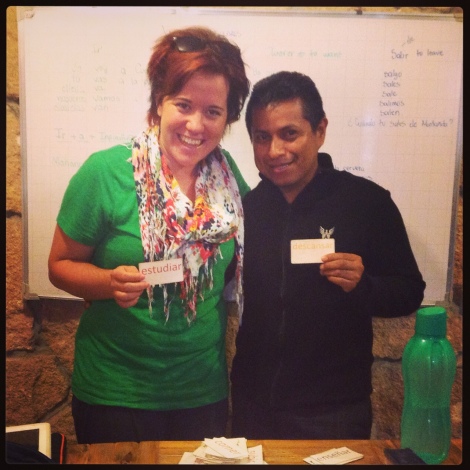 By the end of the week I had come a long way…. Miguel would reward my correct answers with an enthusiastic “so good!” (sounded more like “sue gewwwwd”). I learned the alphabet, numbers, common phraes and adjectives. The verb conguating was pretty good but I HATED coming up with examples. Miguel would give me a verb like “cambiar”, meaning to change. I could congugate it for each pronoun (I, you, she, he, we, they), but then he wanted me to invent an example.  I would say “yo cambio…. I change….. what the heck does anyone change!?! I cant even finish this sentence in english!!!” Then Miguel would give me a look and give me a painfully obvious example like “I change my clothes”…duh. Rinse and repeat. My brain was always so fried by the end of the 3 hours. I would tell Miguel “ahora yo necesito una siesta” as I left each day.

Other than spanish classes, I did not do very much in Montañita.  It turns out that it is low season this time of year and it very much felt like it. Everything seemed to be closed or under construction. Instead of going to restaurants, I bought groceries from a tiny shop and easily lived off $5 for 3 days (comboed with a free breakfast from the hostel). The town is right on the beach and I was hoping for sun, but of the six days it was only sunny once. I did lots of beach combing, watching the surfers, and lounging in a hammock reading! Ahhhh… beach life. Here are some pics from the week… 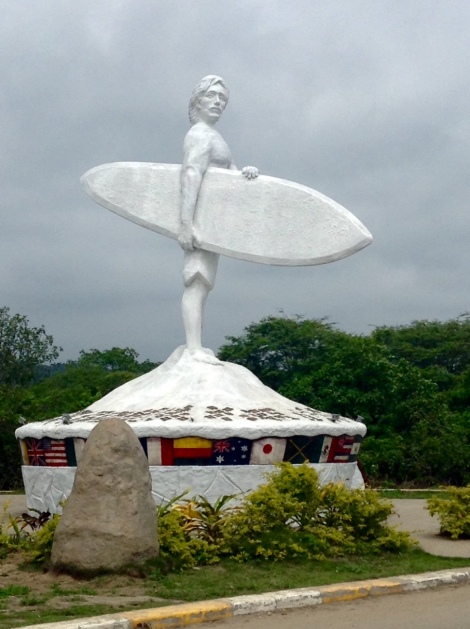 Surfer statue overlooking the town... looking to the beach! 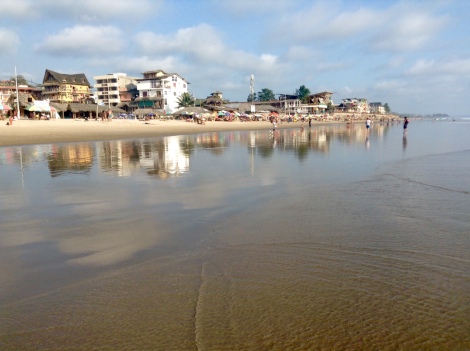 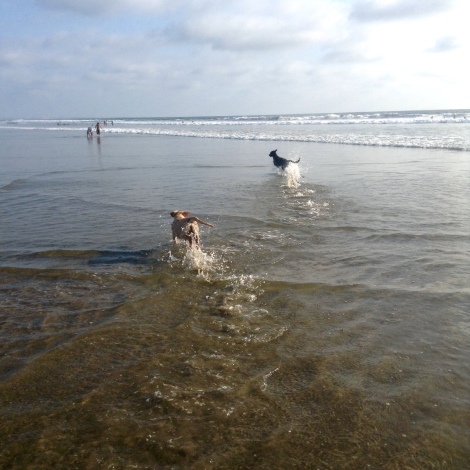 Dogs were everywhere on the beach! 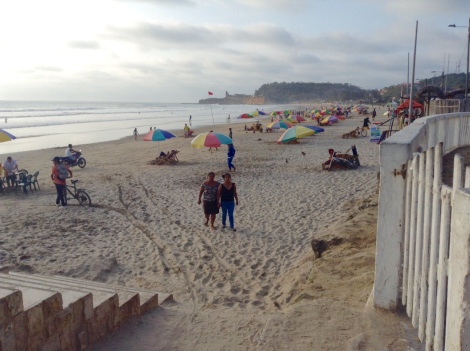 Lots of locals taking advantage of the brief sunshine 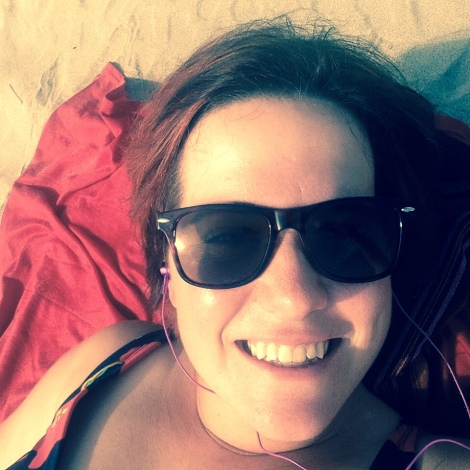 Me, taking advantage of the brief sunshine! 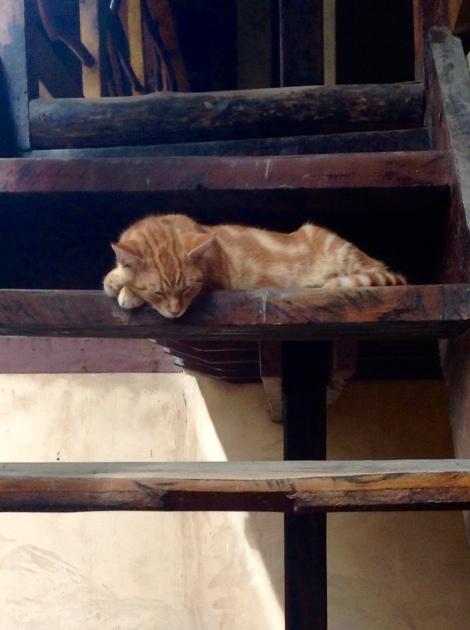 This cure cat was always hanging around the hostel 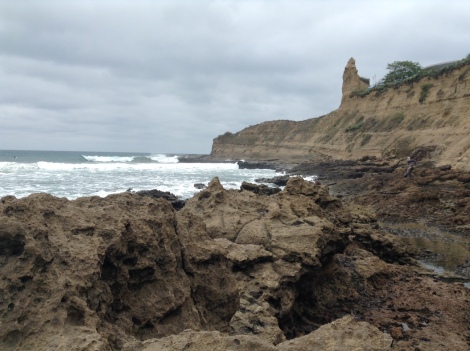 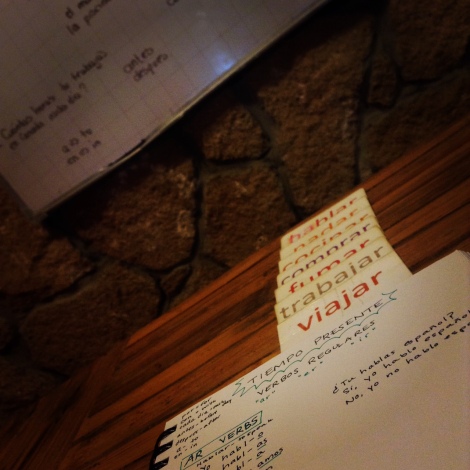 Next I headed to Guayaquil, a huge city and transportation hub in Ecuador. I spent one night here to break up my bus trip to Cuenca. My hostal nice but soooooo loud since my dorm room was next to the kitchen. I also went for a nice walk down the malecon – a pedestrian strip along the river front that is quite developed and really a nice walk. I also got a great view of the city from the top of las peñas.

The patio at the hostel

View from the top of las peñas 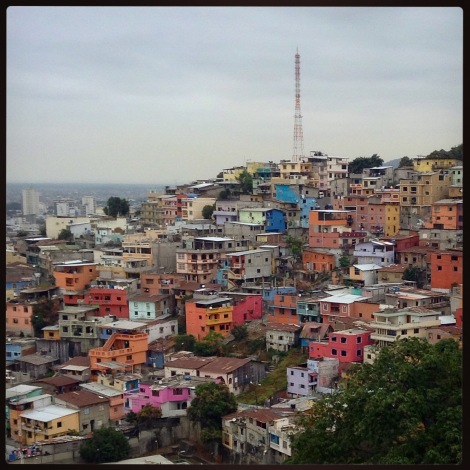 Now I have arrived safe in sound in Cuenca, a beautiful city, for the next couple days!

Trilliums everywhere!
Follow The Adventures of ALi! on WordPress.com 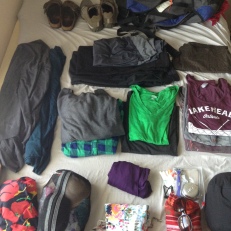 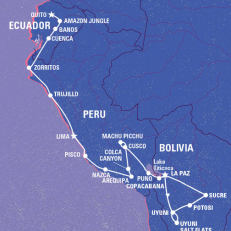